This video is a combination of three different videos that shows the formation of the Eudora area tornado. It's my first filmed tornado of 2009 and I'm very proud of it. Enjoy!
Posted by James Wilson at 9:48 AM No comments: 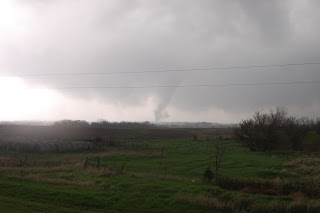 I tracked a cell showning good signs of rotation in the Lawrence Kansas area. I followed the NE tracking storm until i found a good area of rotation. I saw what looked like the start of a tornado so I stopped and readied the gear. I started filming and was lucky enough to get the official start of the tornado. It was picking up quite a bit on the ground which I later found out was a home and steel garage. I snapped a few photos and moved on to track another I thought may come along to the North. I did not arrive in time as i stopped to make sure everyone was OK at the house that got hit. I encountered very heavy rain and some minor flooding but no hail the rest of the chase.
Posted by James Wilson at 7:43 PM No comments:

James Wilson
Lenexa, Kansas, United States
This blog has moved to the below Facebook link. Go there to see updates from the 30+ tornadoes I have seen in the last three years. https://www.facebook.com/ShearInstability/